Some of my Pens

This is a family heirloom that I found recently when sorting out the family home. I’ve no real idea of its age but they date from the 1930’s through to the 1950’s. I know it hasn’t been used for many years. I believe it was put away when my father passed away in the early 1960’s. However it was showing signs of use / misuse and may not have been used for some time before that.

It has been repaired and is now operational. It is a lever filler and the ink sac would have been no good after that time so that was replaced. It was missing a clip and is now fitted with a ‘new old stock’ one from De La Rue the company that manufactured the Onoto pens.

The Junior is a small pen especially compared to the Safari but is still nice to write with. The nib is original and is similar to a modern fine nib. Currently inked with Lamy Turquoise and used most days.

The Onoto THE Pen, as it is marked, is an unusual pen that uses a plunger to refill. The end is unscrewed and pulled out, as it is pushed back in it fills the pen. It also has a lock on the ink reservoir so you need to unscrew the end a half turn to write. W

hen locked it is guaranteed not to leak. Actually they were sold inked.

This is a nice pen to write with now that it has been repaired. There is a short wait after releasing the lock until the pen will write. that takes some getting used to but it is part of the attraction of the pen. It is in good condition too considering its age. That is good as it may be 80 or more years old. A similar one is shown in instruction sheets from 1916 and 1930’s. See here for more information on these interesting pens. Image will be updated soon. 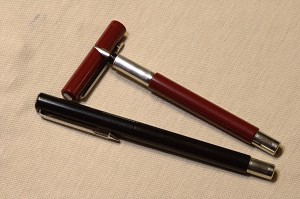 I have 3 of these. They were provided by a company I worked for many years ago. As well as the red and black ones shown here I have a blue one that still has the company name printed on it. The imprint disappeared from these 2 many years ago. I keep the blue one packed away but these 2 get used regularly. I guess they date from the mid 1990’s but I believe they are still available.

The Vector was the inexpensive starter pen in Parker’s lineup. I gather they sold a lot more as ballpoints than as fountain pens. Designed for everyday use and not one you would be too upset if you mislaid it. These were my every day pens too. I used them while travelling as part of my job. Consequently they have a few marks on them. They feel better balanced with the cap posted and so the chrome tips show the result of regular use.

They are used everyday, the black one normally resides in the folder with my notebook.

The Lamy Safari is a well known and popular modern fountain pen. That is a title that is well deserved as it is a modern classic.

I’ve had my Safari in Graphite for a few years and it is a great pen that is easy to live with. It is physically larger than most pens and felt strange the first time I picked it up with the odd shaped grip. However as your fingers close around it and you start writing it just feels right. It is designed to be an everyday pen and can be used all day without your hand getting tired. The ergonomics are that good.

This one is fitted with a Lamy converter and is currently inked with Blackstone Daintree green. A nice colour that looks great on most paper. The nib is a fine and does write well. If I ever got another one I would get one with an extra fine nib. It is used most days too.